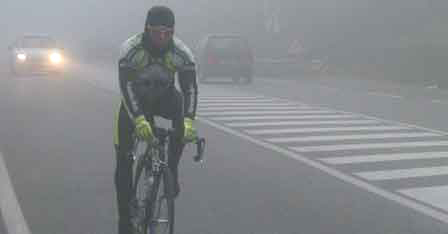 I awoke early this morning and I wanted to ride, plain and simple. After being cooped up all week one begins to get stir crazy. One wants to spin a bit, if not for the full day, at least for the morning. There were a few who wanted to lie about. But I was adamant about heading out. I stood my ground and convinced all doubters. But only one actually got dressed. No matter, solo rides can be just as fun as a group ride. So off we went. Jeez who was to know it would be so foggy! And here we are heading up to San Leo, with the fog moving in and wrapping around us tighter the higher we climb. Note to self, plan on a slow descent if the fog thickens! I don’t think the old man is yet fully awake. Or perhaps he is just a tad cold and stiff! Whimp. Next time I’ll make sure and talk one of the younger guys into a ride. And hey who is that wierdo in the middle of the road with the camera ... damm tourist!