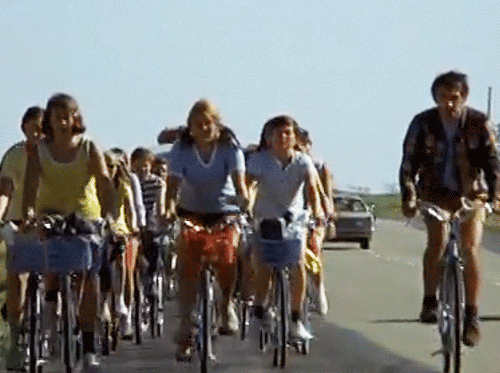 They Yapped All Day

Claude Dube, the 28-year-oId Quebec cyclist who left Montreal last summer bound for Osaka 70 with a caravan of 90 girls, is back in Montreal – $20,000 in the red.
And he never did make it to Japan.
“When we got lo Vancouver they told me they didn’t need me anymore,” he told The Gazette yesterday.
‘The girls left me with all the debts and humiliated – but it was an experience.” Dube became. a well-known figure in 1966 when he peddled from Vancouver to Montreal and in Centennial year he led a group of young girls on a bicycle caravan from Halifax lo Expo 67.
He has written a book entitled Around the World in 6o Months on a Bicycle With $5.
His Montreal – Vancouver- Osaka caravan was to have arrived in Japan for the opening of Expo ’70
But he said he made four mistakes:
“I accepted too many unilingual French-Canadians,” he said. “It made communication next to impossible as i had to repeat everything twice, once in English then in French.”
“1 accepted too many minors ,” he continued. “Sometimes l almost bad lo fight to get them out of bars.
“Thirdly, I had loo much confidence in women, l’ve learned my lesson now.”
“And my fourth mistake was to head for the bottle to calm my nerves,” he said.
“From the time we left Montreal lo the time wc got to Vancouver, all they did is yap all day,” be said.
When the troupe finally arrived in Vancouver, last
Oct. 17. after four months of cycling across Canada, six girls 1eft the caravan.
There the six girls met public relations officers and became involved in various fund raising campaigns, Dube said.
They told the rest of the. girls that a lot of money could be made and the best way to do it would he to leave Dube and form an all girl caravan, he said. “And that is what they did.
“Eventually the publicity deals fell through and 30 girls are still stranded in Vancouver,” Dube said. “I was left with all the tents, bicycles and equipment.”
He said he sold everything but his 1951 car and returned to Montrea1.
“But I haven’t given up on cycling.” he said yesterday. “l’m trying to organize a two-month trip around the province this summer.
“But this time it won’t be all women – no sir.”


10 milles/heure by Marcel Carrière, National Film Board of Canada